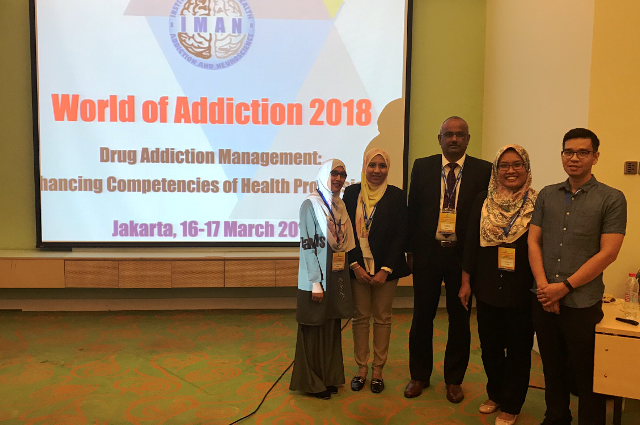 16-17th March 2018, CDR academic staff were honoured to be invited to give talks in Kratom Addiction Symposium at World of Addiction 2018 conference organised by Institute of Mental Health, Addiction, and Neuroscience, Jakarta Indonesia. Dr. Siti Rafidah Yusof gave a talk on Kratom (Mitragyna speciosa): historical perspective to current scenario. Dr. Juzaili Azizi gave a talk titled Phytochemistry of Mitragyna speciosa and the general pharmacology of its major alkaloid, mitragynine. Dr. Farah Wahida Suhaimi gave a talk on The pharmacological effects of kratom and its toxicity. Dr. Norsyifa Harun gave a talk on The potential use of kratom as a replacement therapy of opioid addiction. The director of CDR, Prof. Dr. B. Vicknasingam was invited as plenary speaker and gave a talk on Current treatment of ATS and Opiates, and also conducted a workshop on Behavioral intervention and pharmacotherapy for co-occuring opioid and ATS dependence.